Ace Spectrum is about you — the ACE Learning Centers.
It’s a quick sharing of ideas, inspiration, opinions and best practices among our continuing education organizations.

I’m so happy to talk about what a group of all-stars in training we have this year in KALW’s Audio Academy. Check out some of the work they’ve done in the last few weeks, both around general news as well as informing folks about the upcoming midterm elections:

Here are some thoughts from the Academy fellow who made that last listed story, Mary Catherine O’Connor: 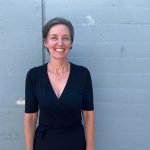 I have an old clock radio. So instead of being jolted awake by a grating alarm, KALW rouses me from my slumber every morning. Usually the first thing I hear is announcer Kevin Vance, or the BBC World News. Every so often I hear a news brief by an Audio Academy Fellow. That’s actually how I first learned about KALW’s Audio Academy.

I’m not new to journalism, but I am new to making radio. And I can’t believe how much I’ve absorbed in the first month of the program. I’m having to unlearn many habits and mindsets, both major and nuanced, from print journalism… No, unlearn isn’t the right word. Adjust. Because it’s not as though I’m leaving print behind – I’m just building a new skillset. My goal is to use these new skills to become a better reporter, a more keen listener, and more capable communicator.

Audio Academy is a ten-month program. That’s a huge time commitment for us fellows, but it’s also incredibly demanding of KALW’s dedicated staff. If there’s one thing that has most impressed me about the Audio Academy, it’s how driven all of the instructors, editors, and mentors are to the program’s mission. For them, this isn’t just about teaching us fellows technical skills that we can use in our careers. It’s about sharing their love for radio and for telling true, powerful stories with voice and sound. Most importantly: they want us to internalize that alchemy and interpret it through our individual perspectives. 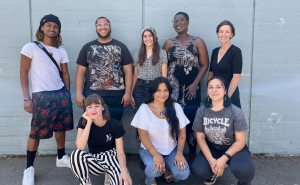 It’s my absolute pleasure to introduce you to KALW’s 10th Audio Academy class!

This is an audio journalism training program made possible for the last decade by the Association for Continuing Education. Our graduates are all over the media, all over the country, and this class is off to a wonderful start!

Here’s a little about our fellows, in their own words:

Mary Catherine O’Connor (she/her)
Originally from Chicago, I’ve lived in San Francisco for the past 20 years and am a veteran reporter and communicator. I was most recently editorial director for Activate, a nonprofit that empowers science entrepreneurs to bring their research to market. Prior to that I spent a dozen years as an independent reporter whose beats included climate, energy, microplastics, technology, and recreation. I’ve written for Outside, The Guardian, Al Jazeera America, and many other publications, and in 2014 co-founded a reader-supported experiment in journalism, called Climate Confidential. I had a brief stint in radio during college and can’t wait to learn the craft of audio storytelling.

Astrid Fedel (she/her)
Originally from France, I moved in the Bay Area in 2017. After completing my studies in Political Science and Communication between France and Latinoamerica, I specialized as a content manager and producer in the visual communication industry, while writing for a handful of design publications. In 2022, I co-founded the production company Incomedia. I’m fascinated to see how radio and podcasting stand at the crossroads between the oral tradition of telling stories, and a media industry renewed by the recent development of podcast production. By joining the KALW audio academy, I hope to become part of this exciting movement as an audio producer. I’m looking forward to producing local and personal stories that help us reflect on social changes. I’m also interested in covering the Bay Area craft, design and artistic scene.

Kelby McIntosh (he/him)
I’ve been in love with sound since I was a kid; my mom and dad are both musically inclined (sing, play instruments, etc.) — their musical talents transferred to me in audio editing. Though I have experience working with Cumulus Broadcasting back in my hometown of Dallas as an editor, most of what I’ve learned has been self-taught. Besides those things, I’m a matcha tea addict, music nerd, and blerd.

Kyri Nashiem (he/him)
I’m a radio host, producer, and editor who recently graduate from the broadcasting program at San Francisco State University. My goal is to use media as a vehicle to incite positive change, bring awareness to leaders from marginalized communities, and create inspiring and educational content.

Wendy Reyes (she/her)
I am a Mexican-American multi-media artist and activist. As a social justice advocate I strive to inform others about social issues and current events in order to promote healthy and just shifts in our society. I aim to use my knowledge, passion, and skills to face challenges with a creative and solution-based mentality.

Daniela Rodriguez (she/her)
Daniela is a passionate first-generation Latinx poet, videographer, educator, and audio enthusiast. Daniela graduated from The Academy of Art University in San Francisco where she received her Associate’s degree in Sound Design for Visual Media. Storytelling and audio have been a haven for Daniela, as they bring her closer to her ancestry. She hopes to share that with the world, whether that is through sound, video, music, or writing. Most importantly, she is passionate about highlighting underrepresented voices and bringing those voices to light. Catch her teaching audio to folks and kids throughout the Bay Area, and learning about audio engineering, or reading in her free time!

Alia Taqieddin (she/they)
Hello! I am a Seattle-raised, Oakland-based cultural worker, DJ, and community archivist. I’m inspired by the notion of documentation as a feminist practice, and I belong to a lineage of Palestinian and Arab women storytellers. You can find my archival work at the Arab American National Museum, which houses my multimedia oral history of Dearborn, Michigan residents in the Oral Histories Collection. In my free time, I enjoy making playlists for my loved ones over chai, hosting my monthly radio show, Kan Ya Makan, on Moonglow Radio, and DJing for Kousa Party, a Bay-Area based Southwest Asian/North African dance party and community gathering.

Just like the weather around California, KALW‘s training programs have heated up toward the end of the summer. We’ve been so happy to work with our wonderful teenaged and adult trainees, and the people who benefit most are our audiences. I often reflect upon how our newsroom’s worldview is so deeply shaped by the people who come through our training programs. The work we produce — representative of the Bay Area’s diverse communities and the world beyond — is reflective of the people who make it. And the more perspectives we can share, the better our practice of journalism.

Check out some of the recent work from our summer folks:

Here are some thoughts from Sebastian about the program he’s been part of: 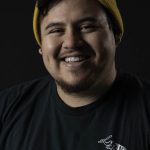 Getting bit by the public radio bug meant I left the world of print journalism for something better. I found that I feel so comfortable writing scripts, getting ambi, and most importantly, I’m able to be myself.

I’m very thankful to news editors Sunni Khalid and Shia Levitt for being able to make me slow down in my voice tracking and take a different angle when I encounter stories I may want to work on in the future. I’m beyond thankful for the cohort I’m in; we were all super shy in the beginning but we watch each other’s backs when new opportunities come up for stories or jobs. After this summer season, I can proudly say that I was good in my hands all along.

I’m on the career path of being a producer on a show soon where I’m able to air thought-provoking stories with a team, but I remember I’m currently doing that here at KALW’s summer academy program.

If you feel like you need that extra push to learn what it takes to be a producer, you should try the program. It’ll boost your confidence in writing, reporting, and pitching stories. You don’t want to miss out on that.

I’m also happy to share some thoughts from 2nd year UC Berkeley Graduate School of Journalism student Hanisha Harjani, who spent her summer working with us: 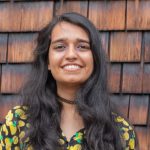 Hanisha Harjani looks for stories underneath the surface.

One of my favorite parts of the Audio Academy have been the morning news digests. This daily practice of identifying the most interesting news and then talking about the questions that those stories bring up has helped me become a much better reader and reporter. During one of the first orientation days at the beginning of the Summer Academy, I remember Shereen Adel, KALW’s Manager of Editorial Operations, quoting Tasneem Raja (of the Oaklandside) who said, “Don’t think of your story as an endpoint, think of it as a middle point.” And the news digest has helped me practice that. I’ve become more confident about the stories I want to tell and when there has already been reporting done on a subject, I am more inclined to look for the spaces that remain and the questions that still linger to tell the stories that might still be underneath the surface.

It’s so important to share your thoughts about the world. It helps shape it, and you never know the impact it will have on the people around you — and even on people you’ve never met. Our young journalists are on that journey, and we’re very grateful that we have the chance to work with, and learn from, them.

By the way, as a final note, I’m really excited to share something from our youngest trainees. The students behind tbh — our podcast by, about, and for teenagers — just dropped the trailer for the new season.

Check it out right here:

There’s a lot we can all gain by listening to the next generation! Subscribe to the podcast and see what these young people have to say!