First, we have a couple pieces of exciting news to share from our Audio Academy alumnus! Christine Nguyen (‘18) shared that she recently completed a health impact journalism program through the University of Toronto. When they went over how to produce for podcasts and radio, she said she “kept thinking back to what a kick ass education KALW provided.” We were so happy to hear it! 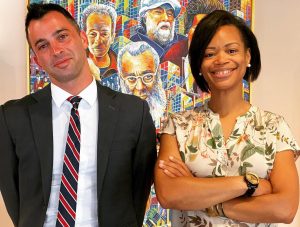 Also, this month Audio Academy alumn Precious Green (‘20) was hired as Director of Programming for Manny’s, a community space in San Francisco that curates events for residents who want to engage in civil and political conversations. Over the summer, KALW partnered with Manny’s to broadcast Welcome to Manny’s talks for our audiences.

Plus, we’re weeks away from the end of our summer journalism training program and the start of a new academic year. Seven outstanding beginning journalists have been working with us throughout the summer reporting news from around the Bay.

They are all also wrapping up feature stories for our ongoing series @WORK about how the jobs people do have changed. So far, we’ve Katherine Simpson introduced us to a florist, Isabella Nguyen Tilly talked to a teacher who directed a musical about Nobel prize-winner Jennifer Doudna, and, Katherine Monahan took us to the river to meet modern-day gold miners.

I asked Katherine Monahan to share what it was like getting out into the world, and onto the water(!) to do her reporting. Here’s what she said.

It has been very strange not to travel much for a year and a half, during the pandemic. But reporting gives me a way to enter a different world without going far.

To make the gold miner piece, I went to the Sierra foothills. My editor had coached me: find a miner, make an appointment, meet them at the chosen time to get the sounds of the water and of the work, and then do an interview later, in a quiet place. That way the audio will be cleaner and easier to balance. I thought, oh that’s smart, that makes sense. I had planned to just show up on my inner tube and try to talk to them in the middle of the river. But this sounded more professional.

I did make one appointment, after several people looked at me funny and said no. A few guys were working into the darkness, splashing around with headlamps, and one of them said sure, come back at 9am. But he didn’t show. And I thought, how can I expect a gold miner to snap to my clock? Isn’t that part of why people are attracted to mining, so they can be free of clocks?

So I put my mic in a waterproof bottle, took my innertube upriver a ways and rode the rapids down to chat with miners midstream. It worked! Suddenly, I was not an outsider, but a river person. And we could relate.

I was touched by what people wanted to talk about. They answered my questions about gold, but then went on to what was really important to them. One woman talked about walking the Camino de Santiago and waking up one morning to the sound of bells, and seeing Basque ponies emerge from the morning mist. Another man told how he volunteered at a big Thanksgiving charity dinner in his army uniform and the families wanted to thank him for his service. Another talked – carefully! He didn’t want me to spill any secrets – about the handwritten letters he’d pored over in the local library between the original gold miners and their wives.

Everyone has their own world. It’s like journalism gives us a kaleidoscope to look through, with each person one of the gems inside, that casts a particular shine and color. It was an honor to hear what was important to these people and to come to understand that all of us that day, no matter how different, loved the river. Pardon my sentimentality. But it’s true.

As I keep reporting, I hope to focus more on what people want to communicate and a little less on what I’m looking for. I think that’s the way we learn.