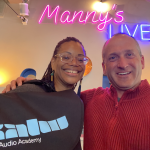 I just got back from visiting Audio Academy class of 2020 alumnae Precious Green. She’s working as Director of Programming at Manny’s — a coffee house, bar, bookstore, lounge, and events space — which has nightly civic-minded engagement events. Precious just celebrated her one-year anniversary on the job, and it’s been a busy one! She recently interviewed California Representative Adam Schiff on stage, and in a couple of weeks she’ll speak publicly with San Francisco District Attorney Brooke Jenkins. Really thriving in a great space. You can see, we were pretty happy to see each other there, and she’s repping our training program in the process!

While that’s great news, I have some challenging news to share, too.

Here’s the backstory: Our training program in California state prisons was recently awarded funding through a California Arts Council program that would have continued our work for two years at Solano and San Quentin State Prisons and expanded our programming to California Institute for Women. But two weeks ago, we learned that a clerical error led to the council rescinding all awards (including not just us but 14 other organizations working in prisons).

We can reapply, but the process will take an estimated four months, there’s no guarantee we’ll get the funding, and our uncovered costs in producing our podcast and providing training and support for incarcerated journalists during those four months totals $80,000.

We’ve launched a crowdfunding campaign, and it’s generated over $15,000 so far. Please check it out, if you get the chance, to learn more of the story, and if it works for your budget, consider making a donation to keep the program going! Here’s the link. And while you’re at it, check out episode one of season two of the Uncuffed podcast our program participants produce! Here’s where you can find that.

Meanwhile, our in-house summer trainees have been hard at work, learning the trade and developing their careers. One of them is Sydney Fishman, who’s been a terrific contributor to KALW’s newsroom. Here are a couple of her recent stories:

Here she is, mid-selfie, during a voice recording session in KALW’s Studio B: 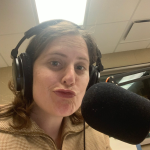 Sydney Fishman making stories and selfies during a recording session at KALW.

When I first started the KALW Summer Journalism Training Program, I didn’t know just how much I would learn from the incredible staff at KALW. I recently graduated from a university program in journalism and am currently working at KCBS Radio. Still, I wanted to join the KALW newsroom to learn more about producing long-form narrative stories. I have learned so much in my short time at KALW. The days I’ve spent with the KALW staff have enhanced my script writing skills, the way I interview people, and how I approach voicing scripts for radio. One of my favorite aspects of being at KALW is working with editors Sunni Khalid and Lisa Morehouse. I spent a great deal of time working with Sunni as my vocal coach, where he showed me how to put more emotion and energy into my narrations. Lisa guided my writing and helped me understand more about creating a “scene in sound.” The other KALW editors and producers gave me detailed feedback on my pitches and helped me finish stories that were mere “ideas” at the beginning of the program. I appreciate all the KALWers, and it will be super hard for me to leave at the end of the summer.

Super hard for us, too. But exciting to see what you do next!