This week has provided a sea change for the United States and for the world.

In the same month that riotous supporters of Donald Trump stormed the Capitol, the same location hosted a peaceful transfer of presidential power to Joe Biden.

As a journalist, it means a lot. For the last four years and more, reporters working hard to tell the truth, and truth to power, have been attacked from a bully pulpit as purveyors of “fake news.” It’s led to mistrust, to violence, and during the Capitol insurrection, to graffiti on an interior wall that read, “Murder the media.” It’s terrible and terrifying.

It’s also remarkable that so many blatantly insult and threaten people whose very job is to seek truth, who have codes of ethics around fairness, and who struggle with the meaning of objectivity. And yet, though Donald Trump has been voted out of office, it does not mean the journalists’ job becomes any easier.

There is a lot of work to be done.

A listener wrote a letter to me last week sharing a link to a study tracking distrust of mass media. It’s a largely partisan lack of trust, fueled in part by agenda-oriented politics. But the erosion of public trust in journalists has been taking place for longer than four years. It’s been more like four decades.

I’ve worked in this industry for many years, and I’ve taught hundreds of people to be journalists. Just because the new United States president is not, now, calling journalists “the enemy of the people” does not mean trust will suddenly be re-established. It may instead cause a relaxation where there must be diligence. Journalists have to hold every elected official equally accountable. We must make strong efforts to report on the root causes of inequality and unrest. We must redouble our efforts to connect with neglected and misrepresented communities, so they can recognize the value of journalism. It won’t happen because we say it’s valuable, but because we show it.

One of the ways KALW does this work, of course, is through training. Whether we’re working with people incarcerated in state prisons, teaching workshops to students enrolled in Bay Area high schools, or training the folks from around our region in our Audio Academy, we’re always examining journalism. Whose voices do we include? How are people represented? Who is telling the stories? It’s all important.

Last week, we launched a series of stories in a series called @WORK. These are profiles of people from many different communities that are produced by fellows in our Audio Academy. We’re airing new ones every Tuesday and Wednesday. Here are the first two:

Photojournalism In A Pandemic: Telling Stories Without Getting Too Close — Andrew J.M. Garcia

And here are some thoughts Andrew shared about his experience as an early-career journalist. 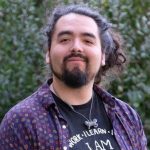 I initially had my reservations about starting a brand new career in radio and taking place in a nine month intensive training program in the middle of a pandemic. It felt like a scary, if not mildly foolish endeavor to embark on in the midst of such uncertainty. But I couldn’t help but feel that KALW was offering me a shot at something I had craved for so long, a chance to feel like my work had purpose. That in my career I would have a chance to have a positive impact on society and make the world around me a better place, at least in some small way.

In Audio Academy I am being given the tools not just to witness history but to document it. And what a time to be documenting! I have participated in live election coverage, written stories about the rippling impact of the pandemic on schools and journalists, and had a great time doing it. The community, education, and opportunity that has been given to me by KALW and ACE, I hope to pay back in full through my newfound drive to better my community. Through diverse storytelling, ambitious reporting, and a strong desire to help those journalists who come after me learn and benefit much in the same way I am now with Audio Academy.

My one goal coming into Audio Academy was to feel comfortable calling myself a journalist. To know that I have the skills, experience, compassion and ethics to make it as a reporter and know that in my heart I am worthy of that title. I am not quite there yet but I know I’m close and that all of the wonderful people at KALW will keep pushing and supporting me until I am. For that, I am very grateful.