KALW Highlights from June – From Uncuffed to Audio Academy Graduation

It’s been a minute, and I have some really great highlights from the month of June to share with you!

One is that members of Uncuffed — our training team based in California state prisons — completed their trip to Norway for the International Prison Radio conference. Here’s a fun pic of some of our crew from a radio station there: 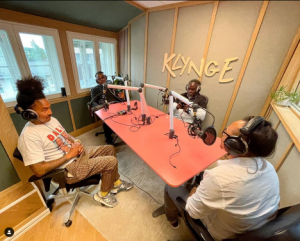 That’s Adamu Chan on the left, Tommy Shakur Ross at the far end of the table, Nate McKinney under the KLYNGE sign, and Thanh Tran on the right. Tommy, Nate, and Thanh were all incarcerated at San Quentin as recently as a few months ago, and we helped arrange for them to get passports and permission to travel abroad.

Then, in late June, the Uncuffed team won a 1st Place award in Division A from the national Public Media Journalists Association for “podcast interview.” It’s for an episode called “Nate’s Going Home.” (Yes, that same Nate as you see in Norway there!) See the announcement by navigating around in the PMJA page. Congratulations to the team for the well-earned honor! 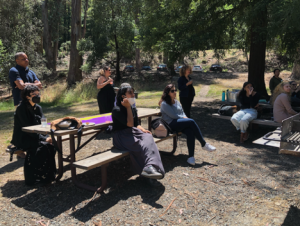 Here are a few pics from their graduation, including this one of a bunch of people in Tilden Park listening to a mentor sharing some thoughts: 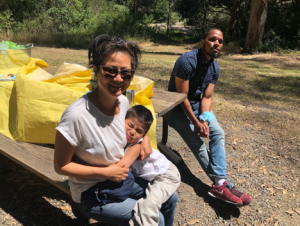 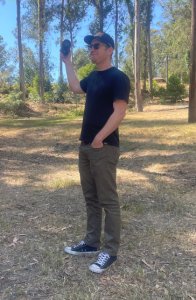 And one of the most fun parts was audio engineer James Rowlands playing a blooper reel created by fellow engineer Gabe Grabin while channeling John Cusack:

You know what that picture makes me think?

(Can’t take direct credit for that one.)

I can say, though, that with the Audio Academy completed, these graduates join others throughout the industry, all around the country, who have the skills to build careers as audio journalists and storytellers. We’re so excited to hear what they go on to do and be part of the world they help to shape!