KALW: Neither Snow Nor Rain Nor Heat Nor Gloom of Night Stays These Journalists from the Swift Completion of Their Appointed Rounds

I derived that header from George Herbert Palmer‘s translation of Herodotus‘ Histories. It applies well to the postal service (which uses a version as an unofficial motto) as well as to KALW‘s trainees and professional journalists. We’ve all got obstacles to overcome to do our work these days, but it’s as important as ever that we do a good job and come through when we’re needed.

As we come within a week of Election Day, 2020, KALW has been conducting some unprecedented election coverage and outreach, led by members of our Audio Academy. I’d like to give you an update! 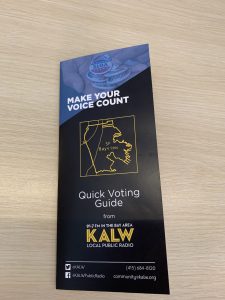 When we surveyed our audience before the last presidential election, we overwhelmingly heard they wanted — actually needed — simple and clear explanations of the many, many, many propositions and measures on their ballots. We responded with our bingeable Election Briefs: two minute, non-partisan, informational and fun digests of state and local ballot measures.

This year, we doubled down — pretty literally. By Election Day, we will have produced about 50, including all 12 state propositions, all 13 in San Francisco, a tri-county ballot measure about CalTrain, and every county-wide ballot measure in the rest of the Bay Area’s eight counties. We also chose many of the city measures, with a focus on those affecting low voter turnout areas.

We got started producing this work back in July, and we’ll be working on them right up through the end of the week. They’ve been primarily reported on by our summer trainees and continuing Audio Academy grads at first, and then by the Audio Academy class of 2021. They’ve been a great training tool: quick, personable, well-researched, fact-based pieces, and they really got this class going swiftly.

Additionally, we translated our Election Briefs on all 12 California propositions into Spanish. And we developed partnerships with the bilingual newspaper El Tecolote, as well as The Oaklandside and NPR’s California Hub to distribute them all.

If you are looking for some help getting straightforward information to help you with your vote, look and listen no further. Here’s the link to our Election Briefs.

After establishing the baseline goal of providing our audience with voluminous information about propositions and ballot measures, we established another goal for our elections coverage: we would focus on helping to inform people in the Bay Area’s lowest voter turnout precincts. We studied precinct returns from the 2016 election and discovered, percentage-wise, where registered voters turned out the least in the Bay Area. These include part of Fairfield in Solano County, Richmond’s Iron Triangle in Contra Costa County, part of West Oakland in Alameda County, parts of Bayview in San Francisco County, and parts of East Palo Alto in San Mateo County.

With this information, we created door hangers discussing KALW’s work and mission in English on one side and Spanish on the other, inviting recipients to connect with us with their questions regarding the election and their community. I was joined in distributing the 5,000 pieces by several volunteers, including Audio Academy graduates Angela Johnston (’14), Precious Green (’20), and Sarah Lai Stirland (’20). It was great to go into the neighborhoods and talk with people, introducing ourselves as public interest journalists who want to get the stories that matter most to them right. Our coverage since then has been shaped, in part, by the questions we’ve been receiving from people in these neighborhoods, including about issues of homelessness, illegal dumping, school board elections, and specifics on propositions and ballot measures.

We followed up by creating voter guides, designed by Chris Egusa (’20), specific to each of the seven precincts where we were focusing our attention. Each one includes info about where and how to vote in their precinct (even if they need to register in person on Election Day), information about where to find KALW’s comprehensive elections coverage about each county including a QR code linking to our website, and capsules about each state proposition including information about who the biggest funders for and against each measure are and how much they spent. We enlisted the help of many volunteers again, including Scott Carroll (’21) and Azul Dahlstrom-Eckman (’21) along with several listeners who contacted us, to distribute 6,000 voter guides door to door.

Another new element we added this year was assigning all eight new Audio Academy fellows specific regions to research and develop relationships within. With our focus on low voter turnout precincts, we made teams of two for Fairfield, Richmond, Bayview, and East Palo Alto (with Sarah Lai Stirland taking on West Oakland as a post-graduate assignment), and they each wrote up beat memos, identifying leading community organizations. Our elections coverage manager, Sonia Narang, connected with many of these groups, and in the weeks leading up to Election Day, we’ve been taking part in group meetings all over the Bay Area to discuss voting issues and answer questions helpful for local residents.

Groups we’ve spoken with, or will speak with, include:

The Fillmore Merchants and Neighborhood Collaborative for a Black voter information session – in San Francisco … (and you can click the link to see the video Sonia took part in around 1:50)

Commission on Aging – in Oakland

Finally, we established partnerships with other media organizations who specifically serve these low voter turnout communities, including El Tecolote, The Oaklandside, Richmond Confidential, Hoodline, and San Francisco Bay View. We conducted interviews with many of their reporters for air on Crosscurrents, and will connect with them again on Election Night as well as after the election as we consider the results.

We’re all curious, aren’t we?! This has been a highly charged election, after four (or many more, really) turbulent years. Now we’re down to just days to find out how things turn out. KALW will be live on the air Election Night, sharing the mic with reporters from NPR and around the Bay Area, from 4pm until 11pm. Tune in and see how things turn out.