It’s not easy learning English, especially if one’s native language has no sound or spelling connections to English. It’s one thing for an English speaker (me) to learn French (I try), a romance language that shares the same alphabet and many of the same words. It’s a test of true grit to learn English if your home country is Eritrea and the language you know is Tigrinya written in Ge’ez script (ትግርኛ). Or from Vietnam where the language is written using chū-Nôm (Tiếng Việt) a script using Chinese and locally invented characters.

But the adult students attending the online ACE Learning Center class, a partnership between Oakland International High School (OIHS) and Refugee & Immigrant Transitions (RIT), show their grit at each class. First, they show up because they want to. They want to learn and practice useful vocabulary and sentences to help them communicate and succeed in their jobs, at the grocery store, at doctor’s offices etc. Second, it’s on Zoom which has some benefits such as not having to drive to a class but can falter as the in-person experience of learning on a screen.

I had the honor of joining a recent online Intermediate Class. The RIT instructor, Cara Lazarus, worked at engaging each student, calling them by name to ask questions or make sure they understood.  The lesson was how to make a daily schedule, including times and events. The homework was to create their own schedule and send it via What’s App to Lazarus, or “Teacher” as she was called by her students.

I then was allowed to ask some questions to the students. My first one was why do they want to take this English class?

“I want to improve my English language,” said Meaza, a newly arrived student from Eritrea. “I want to speak in English and have good pronunciation and listen.”

Sharefa is from Afghanistan and wants to learn English to communicate when she goes to the doctor or the grocery store. “Also, very important for me is I’m ready for being a citizen.”

Gamila, in the U.S. one month from Yemen, said she wanted to help herself and her husband. “I want to understand everything in English,” she said.

“Everything is difficult,” said Afra from Yemen. “Sometimes I understand but I don’t talk.”

Teacher Lazarus agreed and talked about needing to find the right word order for fluency. Even the doctor appointment sequence of name, date and time must be understood. Pronunciation is key too.

Basery from Afghanistan, who is an Uber and Lyft driver, needs to understand and be understood in English. “Sometimes it’s very difficult,” he said. “Like, the way we pronounce is different. When we are talking, they can’t understand us and it’s a difficult thing for us.”

So is practicing English daily. Aisha is from Yemen and she speaks English daily with her husband, family and friends for practice. “My husband must speak English at work, but I find it difficult to speak because I don’t understand everything.”

For some of the students, finding another English speaker to practice the language with is hard. Minh has been in the U.S. a year from Vietnam and works in a Vietnamese company. No one in her family speaks English, but she uses the class as her place to practice.

“I want to speak English but there is no one I talk to except the friends in the class,” she said. “I like it.”

What is hardest for these students in learning English? Aisha said writing is difficult and all the students agreed. They also agreed that the easiest part is reading.

“You see the words and you don’t have to think about putting them together,” said Lazarus. 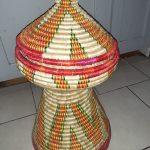 The class ended with Show and Tell, and it was Meaza’s turn. She showed her hand-woven mesob basket made of grass and palm leaves died in red and green traditional designs. It’s a tall basket with a pedestal, has a lid and is often used to hold snacks like popcorn. Meaza also uses it to hold her fermenting injura batter (a plastic wrap protects the basket) which she then bakes into flat pancakes, a traditional bread in Eritrean cuisine. Questions were asked about the mesob and Meaza answered. Even Show and Tell was an English lesson.

With that, class was done, and students were off to deal with the rest of their lives and find time to do their homework. They are an amazing and inspiring set of students, and Lazarus was a professional teacher with much kindness, patience and obvious joy for her job.

Thank you OIHS and RIT for being a part of an ACE Learning Center that makes a difference. The students have the grit to consistently show up and learn English which is obviously an important part of their lives.