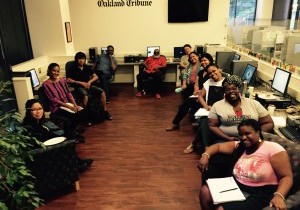 Hello! A lot of our latest initiatives are really taking shape right now. I’d love to tell you about two of them.

On Monday, Audio Academy mentor Ninna Gaensler-Debs and I went to Oakland to meet with our partners on our new Sights & Sounds project. It’s an arts initiative that involves two parts: a weekly program showcasing Bay Area arts from the perspectives of the artists themselves; and a collection of reported stories about the arts in one community, East Oakland, where we will be throwing a live event of multimedia storytelling and performance in the spring of 2016. Community journalists from Oakland Voices, KALW’s newest partners, come together in the offices of the Oakland Tribune.

First off, Ninna and I got a tour of the fantastic 81st Avenue library from the associate director of the Oakland Public Library system and went into or stopped by the other five libraries in East Oakland. We’ll be working with the managers of those libraries to spread the word about our amplification of the arts and setting up listening sessions to bring people from the community together around stories. We then met with Oakland Voices – the team of community journalists organized by the Oakland Tribune and Bay Area News Group. It was a true pleasure to talk with them about what we’re doing at KALW and how we’re planning on working with them on stories about the arts of East Oakland in coming months. They were extremely enthusiastic and gave us a lot of suggestions for venues and performers for the live event. If the collaboration goes as well as our initial visit, this is going to be a brilliant partnership.

Meanwhile, our managing editor Jen Chien and Audio Academy alums Ted Muldoon and Chris Hambrick have been working hard on the weekly Sights & Sounds program. They’ve put together four pilots so far, and Monday, they’ll be recording material for the first one to be broadcast! It’ll air Thursday at 7:44 during Morning Edition and again at 4:44 on All Things Considered. We’re planning on it to be podcast, too.

On Wednesday, I initiated a new training project at Sunset Youth Services – an after school program for teenagers in San Francisco’s Outer Sunset. I used to volunteer there before KALW work took over my hours. One of their staffers, Wendy Baker, who used to volunteer with KALW, is coordinating a bunch of students on their end to do some engineering with us. It’s a good fit because we all do quite a bit of work in ProTools. I gave them several My Mixtapes to work on, and they really got to it! When I arrived, I worked with a boy named Cartier who had two pieces to show me, a girl named Sierra who had made five (!), and a boy named Christian who had made a beautiful Mixtape from an original song that a friend of his named Ari had written and performed. I helped Christian finalize the piece, and you can check out the result right here:

“Rags to Riches” by Fat Chops

It’s extremely gratifying to be working on these collaborations. I think they’re great for the community and great for the station, and I’m so excited to cultivate them and help them grow. Stay tuned for much more to come from our newest partnerships!