No Summer Slack at KALW for Newscaster and Podcast Trainees

If you were to drop by KALW, these days, you’d see a whole bunch of young journalists at work. A big (belated at this point) welcome to our summer trainees Raphael Cohen, Sydney Fishman, Monica Gomez, Hanisha Harjani, Sunday Holland, Lusen Mendel, and Sebastian Miño-Bucheli! They got started in earnest in early June, and they’ve been producing lots of newscast content since then with a bunch of features on the way. Here are some of the stories they’ve covered to date:

Simultaneously, Holly J. McDede, Sarah Lai Stirland, and student teacher Zara Ahmed are running our Summer High School Podcasting Institute out of the station with teenagers Aria Baldinger-Williams, Carolina Cuadros, Cassidy Kanner-Gomes, Elise Muchowski, George Reitan, and Elizabeth Truon. At the end of the program, they’ll produce the podcast tbh: by, about, and for teenagers. Here’s a picture of the crew taken Monday at KALW’s Burton High School campus: 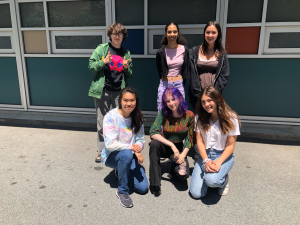 Meanwhile, one of our recently graduated Audio Academy fellows, Erin Copp, joined the program late, and she is continuing her education with us this summer. Here are some thoughts she shared with me:

I came into Audio Academy with a lot of dreams of stories I wanted to tell and a vision of what a career in audio journalism would look like for me. Most of my dreams involved recording people I know and love and archiving their funny stories and experiences. During my first Audio Academy seminar, Shereen Adel, KALW’s Manager of Editorial Operations, spoke the words I will never forget. “Journalism isn’t about interviewing your friends.”  While I was a little disappointed to hear this, Shereen had no idea how much I needed to hear those words. During my time in the Academy, I have hit the streets talking to strangers and met so many amazing people. While my friends and family are great, interesting people, the Bay Area is full of people with amazing stories. I am so grateful Shereen broke me out of my safety bubble and am a much better journalist because of it. While this is one example of how the KALW team has helped me grow, I learn everyday from this incredibly talented and generous group of people. 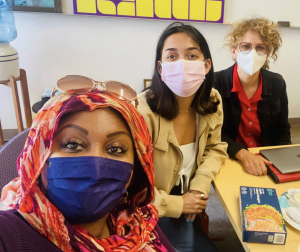 When we’re talking about incredibly talented and generous people, Erin fits right in!

And speaking of extraordinary folks, congratulations to another Audio Academy alum, Christine Nguyen (2018), for being named a member of the AIR New Voices class of 2022

Christine Nguyen (she/her) became a writer and audio-maker after two decades as a physician. She received journalism training at KALW and at the University of Toronto. She has bylines in radio and digital publications including KQED, KALW, and The Washington Post. Her work has earned awards from the San Francisco Press Club, The Society of Professional Journalists NorCal, and the AAJA. She’s obsessed with native gardening, which translates as cultivating plants otherwise known as weeds. 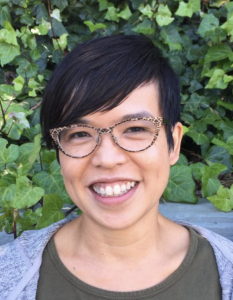 CAPTION: Christine Nguyen, when she was in KALW’s Audio Academy.
CREDIT: Ben Trefny