By Dexter and Luna, ACE Poetry Contest Mascots, helped by Martha who seems to like punching keyboard keys one at a time instead of all at once like we love to do 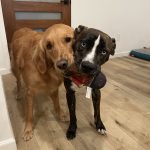 Dexter here. How’s your National Poetry Month been going, Luna? I must say I’ve been having a lot of fun barking poems to Russ as we go for walks. I also have barked poems to people who come to the door. They think I’m just barking at them, but I’m really barking poetry.

One of the cool things about this month is the different poets I’ve learned about. One is Jean-Joseph Rabearivelo who is considered to be Africa’s first modern poet and great literary artist from Madagascar. He grew up poor and never completed what we would call high school, but he educated himself in the French language and traditional Malagasy poetry. He published poems when he was a teenager that were published in literary reviews and then went on to publish several poetry collections as well as an opera and two novels.

Wow, Luna. That’s pretty cool. Thank you for introducing me (Dexter) to this poet and his poetry.  One of his poems we both loved is about birds. The cool thing about poetry is that it tells personal stories in a sometimes hidden way, and this poem says that the one who succeeds isn’t necessarily the strongest or the most beautiful. It’s the one that is a free thinker, one that is sure of him or herself and free from their “body” who makes an impact on others and the world. Check it out.

Jean-Joseph Rabearivelo
Translated from the French by Vivek Narayanan

The iron bird, the bird of steel
who after having lacerated the clouds of morning
would want to puncture the stars
beyond the day,
retreats, as if in remorse,
into an artificial cave.

The corporeal bird, the feathered bird,
who forces a tunnel through the wind
to get to the moon he’s seen in a dream
among the branches
falls with the night
into a labyrinth of leaves.

And the disembodied one
who ravishes the custodian of the skull
with a stammering song—
opens those echoing wings
moves to pacify space
never to return except once, as an immortal.

I’m glad you liked the poem, Dexter. Next time we bark at birds we’ll ask ourselves is this a bird of steel, a bird more concerned with their body or a bird who flies high and becomes immortal because they have a strong mind. That’s a poetic lesson for all of us.

Luna, that’s because both of us have strong minds. Just ask Ross who we hang with, takes us for walks and teaches us how to be good dogs and gives us yummy treats. We hope that all you poets out there are enjoying learning about poetry and are bravely writing poems. Poets come in all shapes and forms, but it’s the poet’s mind that finds the words to rise above and find each poet’s truths.