Over the past few weeks, her training has brought her back to making quick turnaround news spots, largely around emergency services and the justice system. Here are a few examples:

Oakland Is Seeking New Applicants For The Police Commission

Then last week, she made this one about the release of an Alameda Police Department bodycam video of the officer-involved death of Mario Gonzalez:

That story deeply affected me, and I decided it would be valuable for our audience to provide an analysis of that tragedy. With Annelise’s help, I conducted this Q and A with Hana Baba:

Breaking Down The Police Video Of Mario Gonzalez’ Death

Having the opportunity to inform the public about critical issues is one of the privileges and duties of being a journalist. It’s something that Annelise recognizes, and she’s tapping into her background as a criminal defense investigator to provide depth and nuance to her stories.

Here’s a feature she made late last month:

And here are Annelise’s thoughts about her work with KALW’s news department in the Audio Academy: 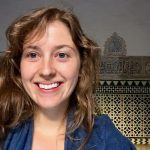 While I was reporting a story about the rising number of people held at Santa Rita Jail in Alameda County, I spent some time petitioning the Alameda Court to allow me to record their arraignment proceedings. Arraignments happen nearly every day in a criminal court system and are the place where people who were arrested over the past 48 hours have the charges against them presented to a judge. They meet their defense attorney and are given the opportunity to state whether they are guilty or not guilty and request bail. It’s the first stop for anyone about to enter the criminal justice system. Arraignments are open to the public, but typically the audience isn’t allowed to record what’s going on. Members of the media can request special permission to record and the judge presiding over the courtroom has full discretion to allow or deny the request. I made my first request and received a one-line response” “The media request you have submitted has been denied.” I reworded my request and applied to a different courtroom. Again, my request was denied. I asked for the justification for the denial and was given none.

There are many reasons a judge might deny a recording request — it’s not in the best interest of people accused of crimes to have their names and the charges against them broadcast across the county — but it did make me wonder what “public proceedings” really means. Is it truly public if you have to be present at the moment something happens to see it? Or is that only “public” for people with the privilege of free time to attend? During the pandemic, journalists and regular people have had more access to government meetings than ever before. Where going to a school board meeting used to mean traveling to the meeting location to sit or stand, if the room was crowded, for hours until your item was called, now we can tune in online from the comfort of our homes, while making dinner dressed in our pajamas. But even then, not everyone can make it. The reason journalists ask to record these meetings is because we know that hearing our elected officials statements ourselves rather than a talking head paraphrasing them later on, is more compelling. Bearing personal witness in this way activates involvement. This is why Darnella Frazier’s video recording of George Floyd’s murder sparked a rebellion. For a year now, more people have had more accessible ways to see for themselves how the sausage of our democracy is made. But without accessible recordings, it’s not enough.

The Audio Academy has taught me that, among other things, it’s the radio journalists’ responsibility to bring listeners into the room, metaphorical or literal, where decisions are made. We pull back the curtain on why people make the decisions they do, and why our world is the way it is. And by unveiling the cogs in the machines we illuminate possible paths to change. This is why I applied for permission to record arraignments and why, when I was denied, I applied again. Most governmental proceedings should be public and when they are public, they should be allowed to be recorded and broadcast. Without that permission, the promise of transparency provided by “public” meetings becomes hollow.